Leopards, Lions, Hippos & Visiting The Source Of The Nile

Finally reaching Uganda, Dr Anne Small is captivated by animals everywhere, from the water to the grassy plains and up to the treetops. Her sensational photos reinforce her message during this African journey to spread awareness for the vital importance of work by Melbourne-based organisation For The Love Of Wildlife, founded by her friend Donalea Patman OAM.

Dr Anne’s travel blog from Uganda: We flew from Ethiopia to Kampala, the capital of Uganda. Uganda is greener, much cleaner, and seems to have a higher standard of living than Ethiopia. However, it is not without its unique traffic hazards:-

1) There are probably about a million motorcycles in the Kampala – they don’t seem to obey any traffic rules and I’m amazed we did not see any accidents.

Our guide, Ben, said that there is a whole ward in the large city hospital dedicated to treating motorbike accident victims – and I would believe it! 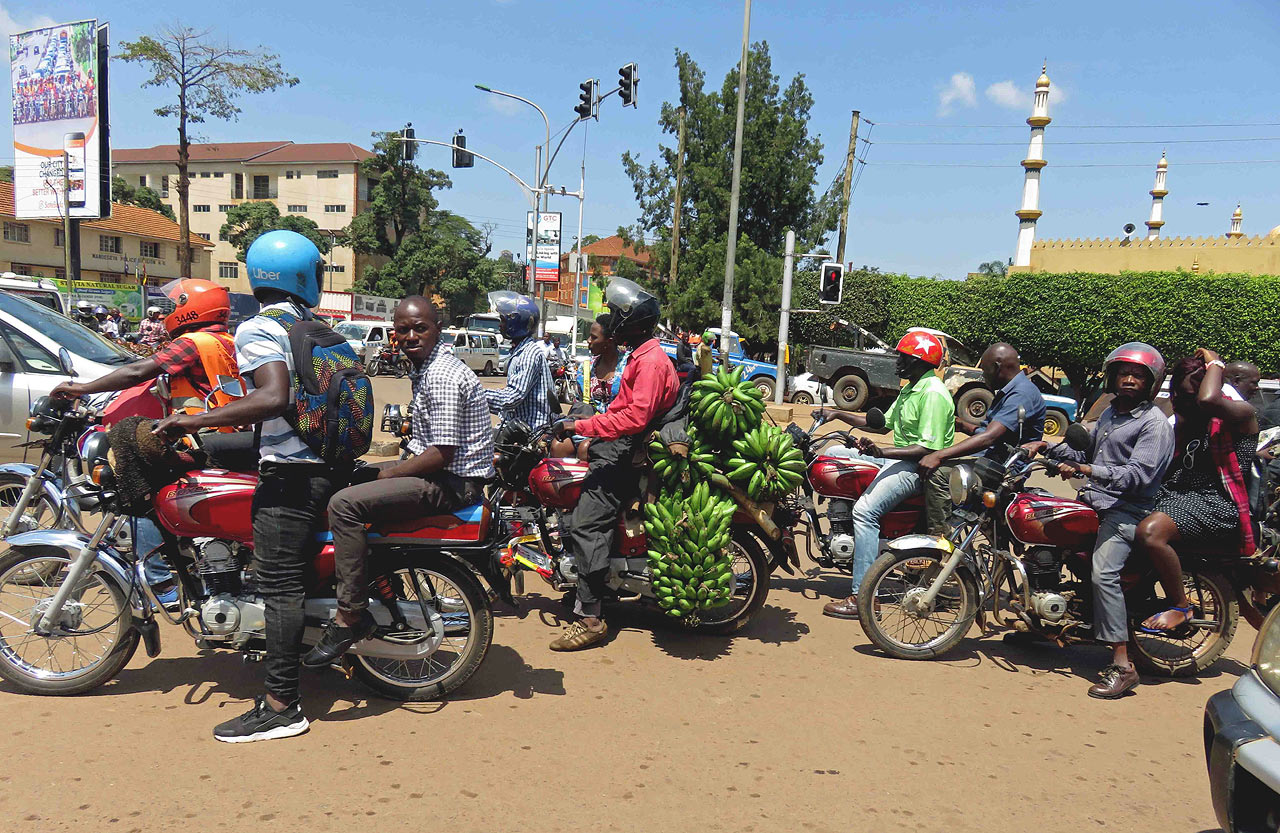 2) Then we came across the other traffic hazards in the country:-

a) Elephants blocking the road. Ben explained that you never try to make them move or else they can charge you – especially the bull elephants. 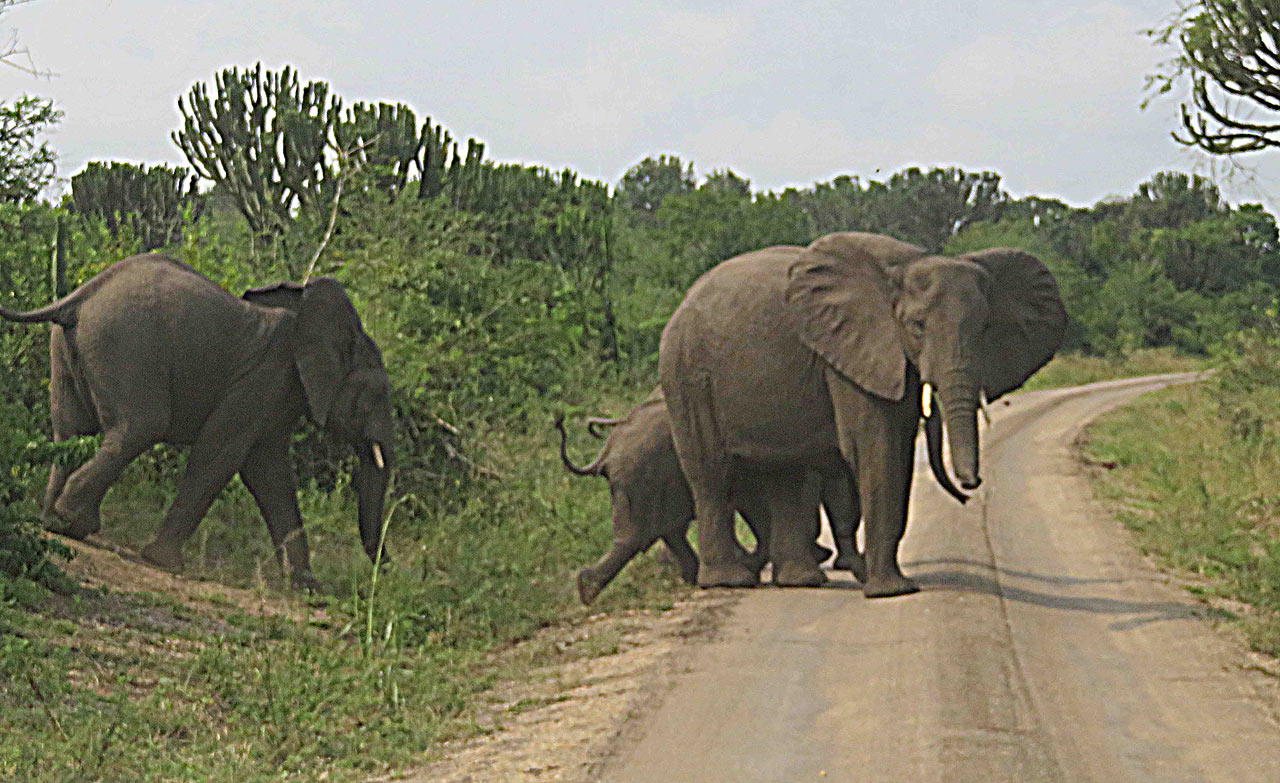 b) Baboons on the road 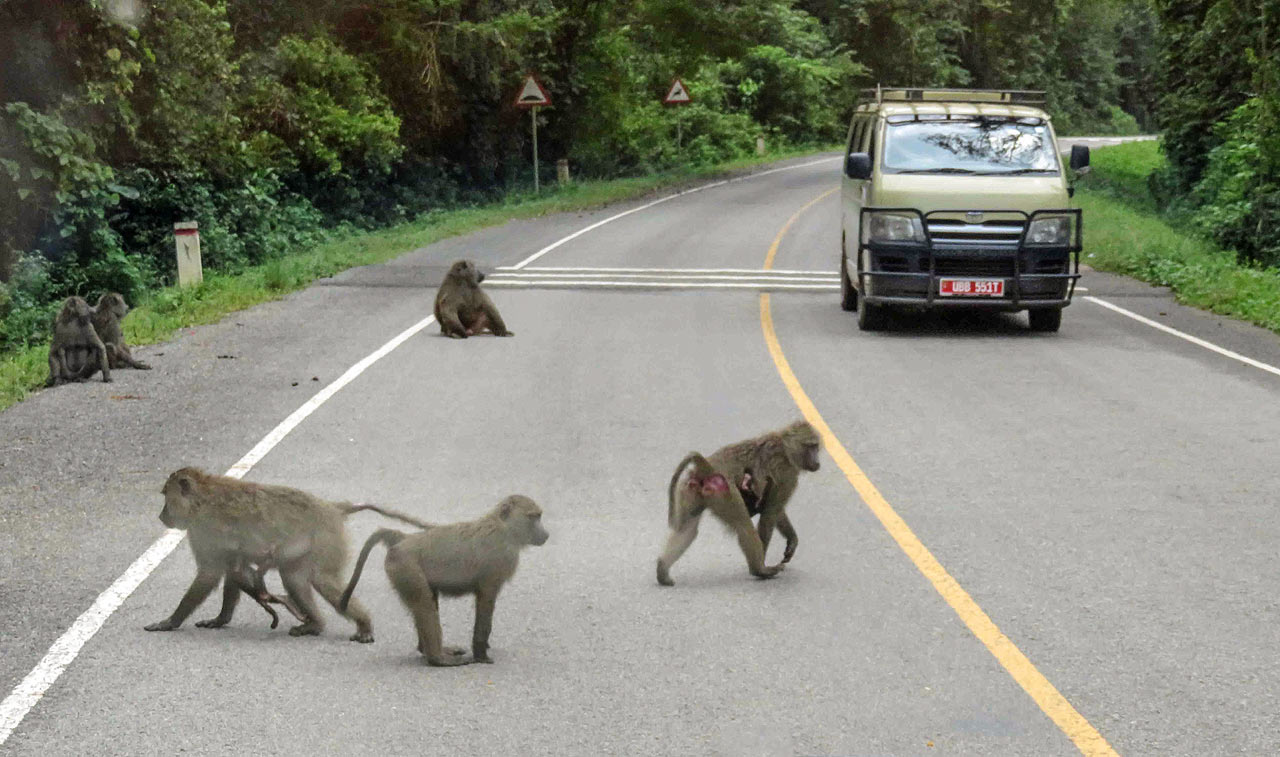 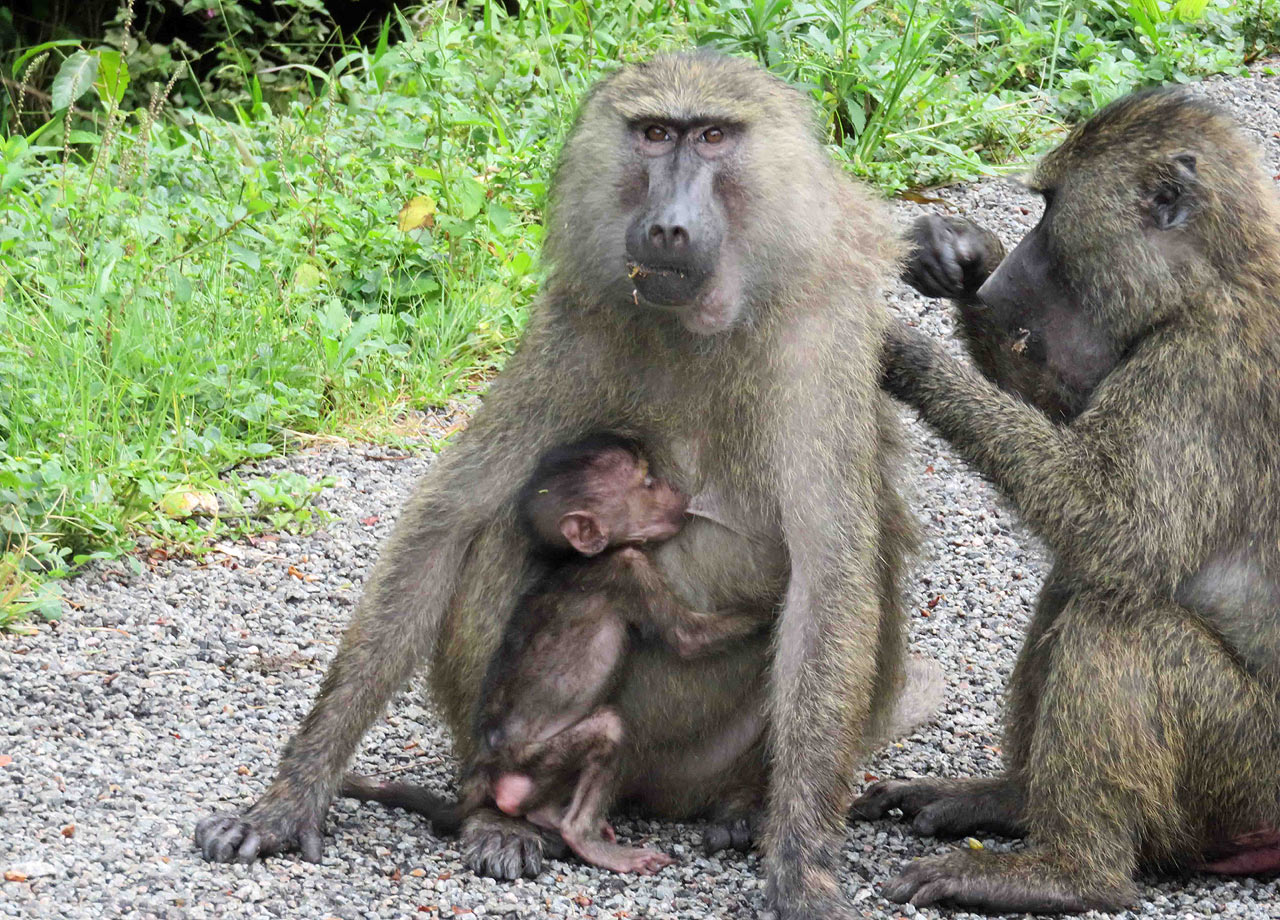 c) And buffalos crossing the road as well 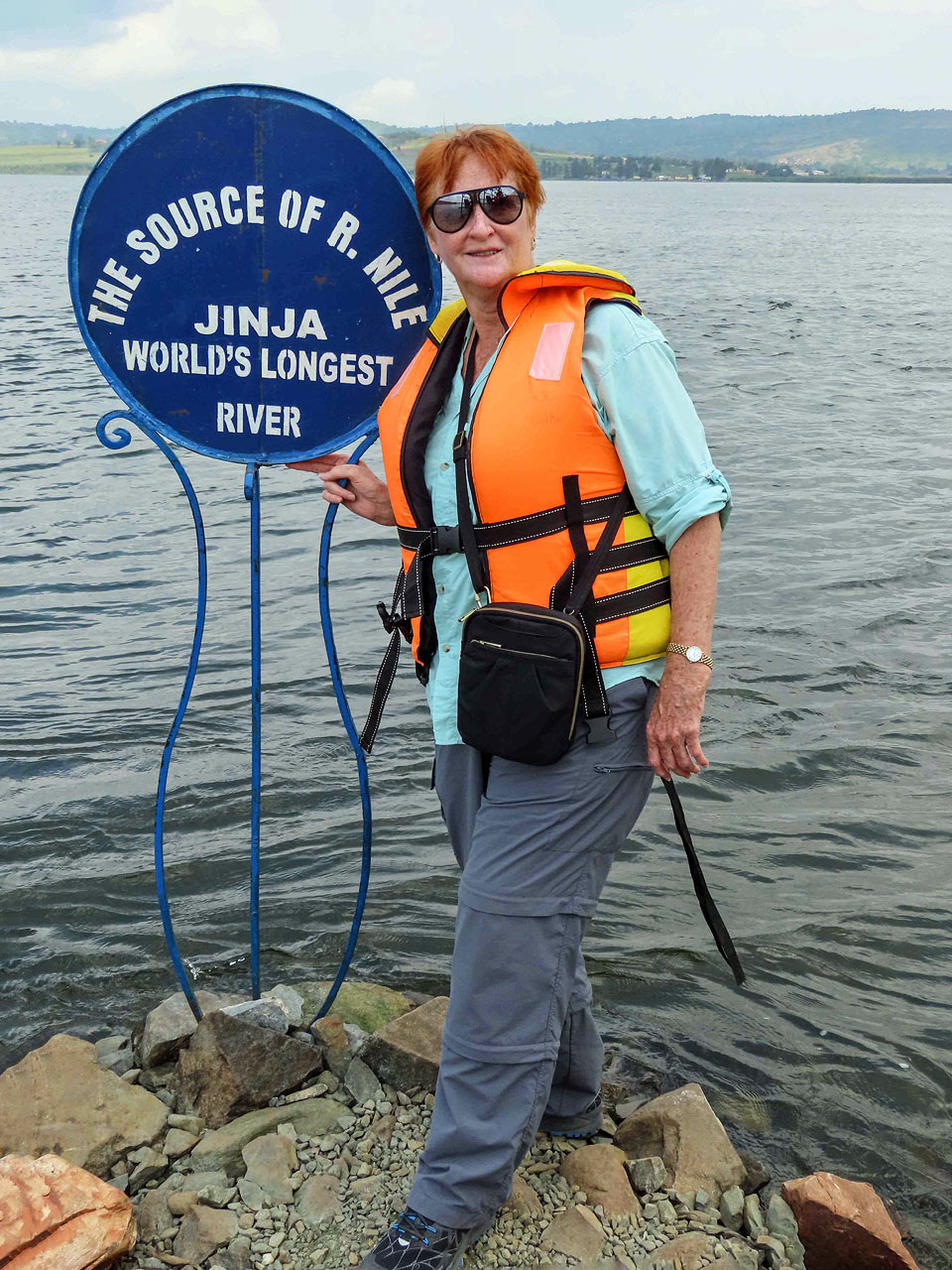 While in Kampala we drove to the source of the White Nile. It used to be a spot where the water bubbled out of the ground. However, the water level has risen so much with the hydro-electric dam that it is more difficult to see the water bubbling up now.

The start of the Nile can be identified by the start of the flow of water rather than the still water of Lake Victoria. It takes 3 months for something placed in the water here to reach the Mediterranean Sea. 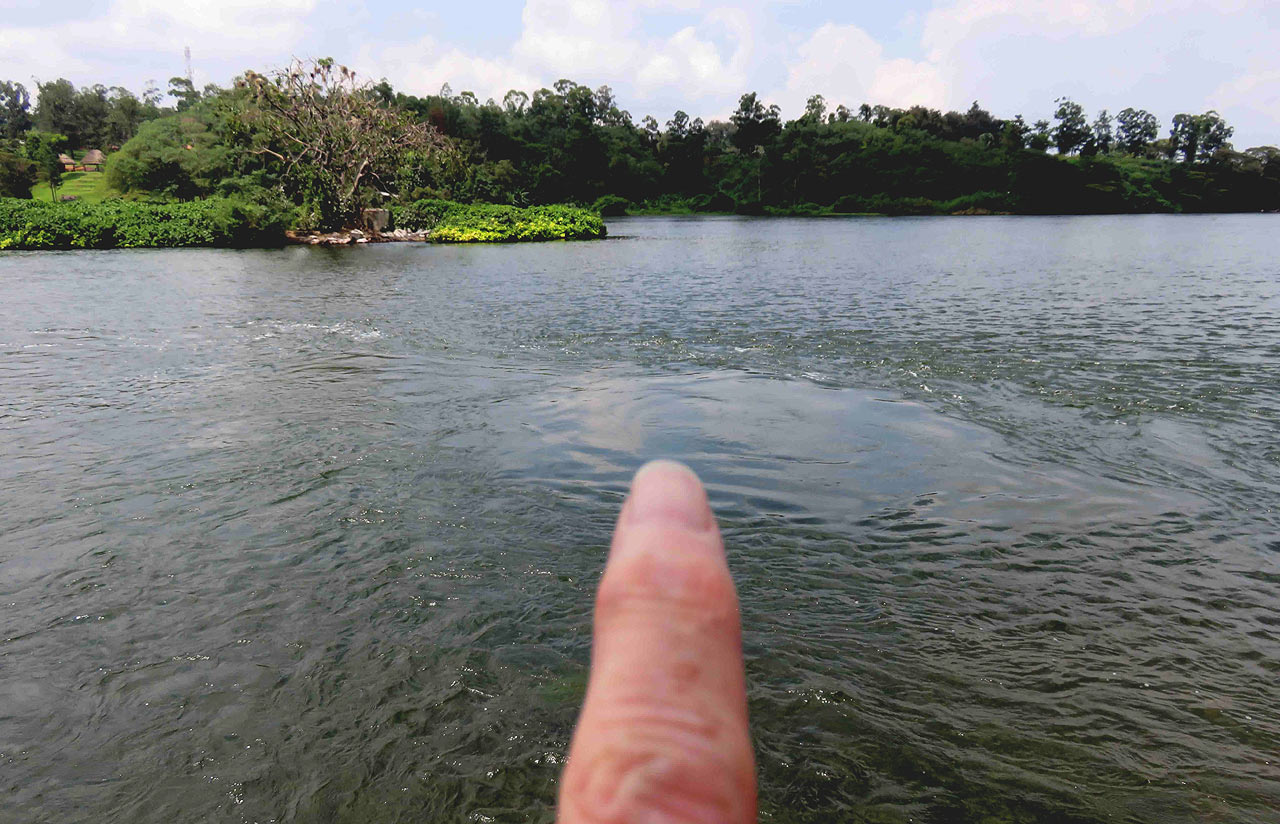 We then drove to Kibale and its National Park, designated the Primate Capital of the world. The huge problem was that it had rained all night and most of the morning, so the chimpanzees that we had come to see were asleep or not visible at the top of very large trees, instead of foraging on the ground. We only saw about 5 at a great distance.

At the end, we did see a black and white Colobus monkey with an amazing tail and a red-tailed monkey. 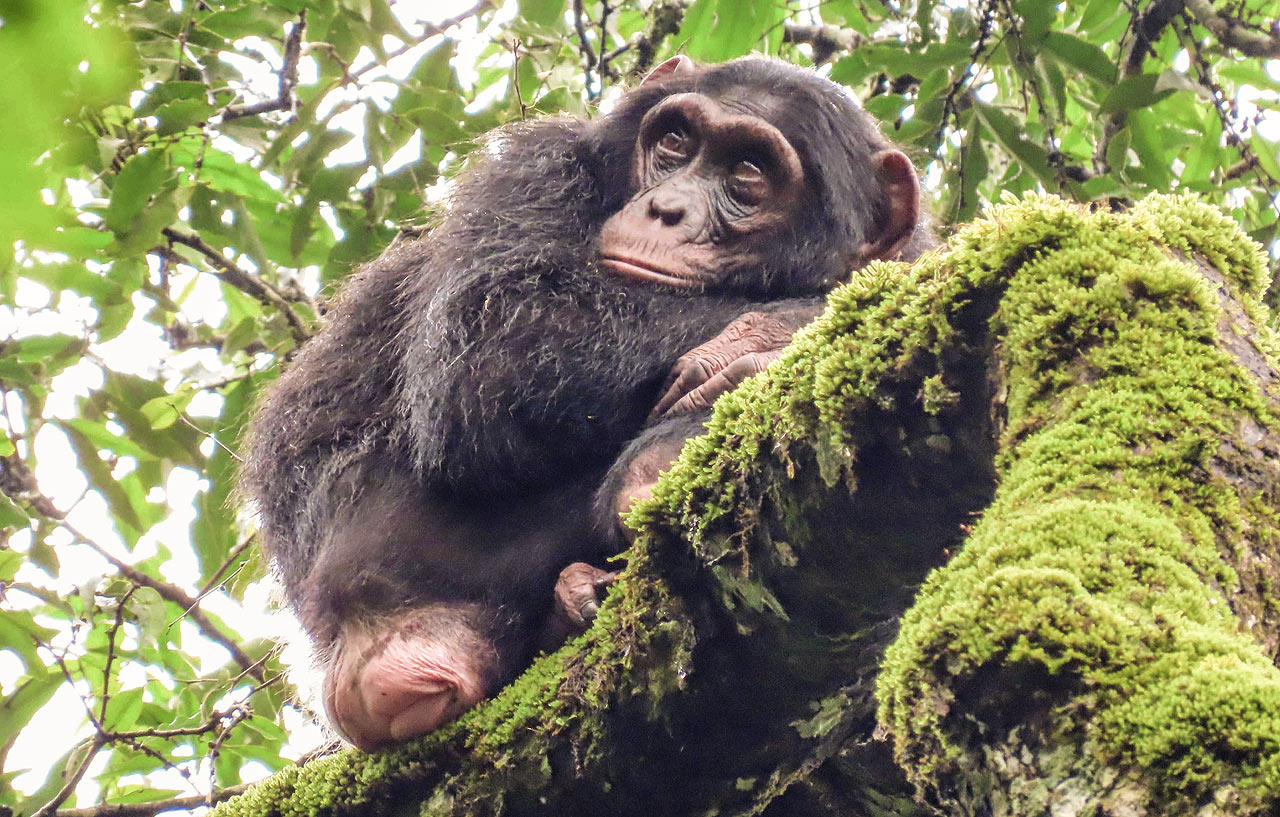 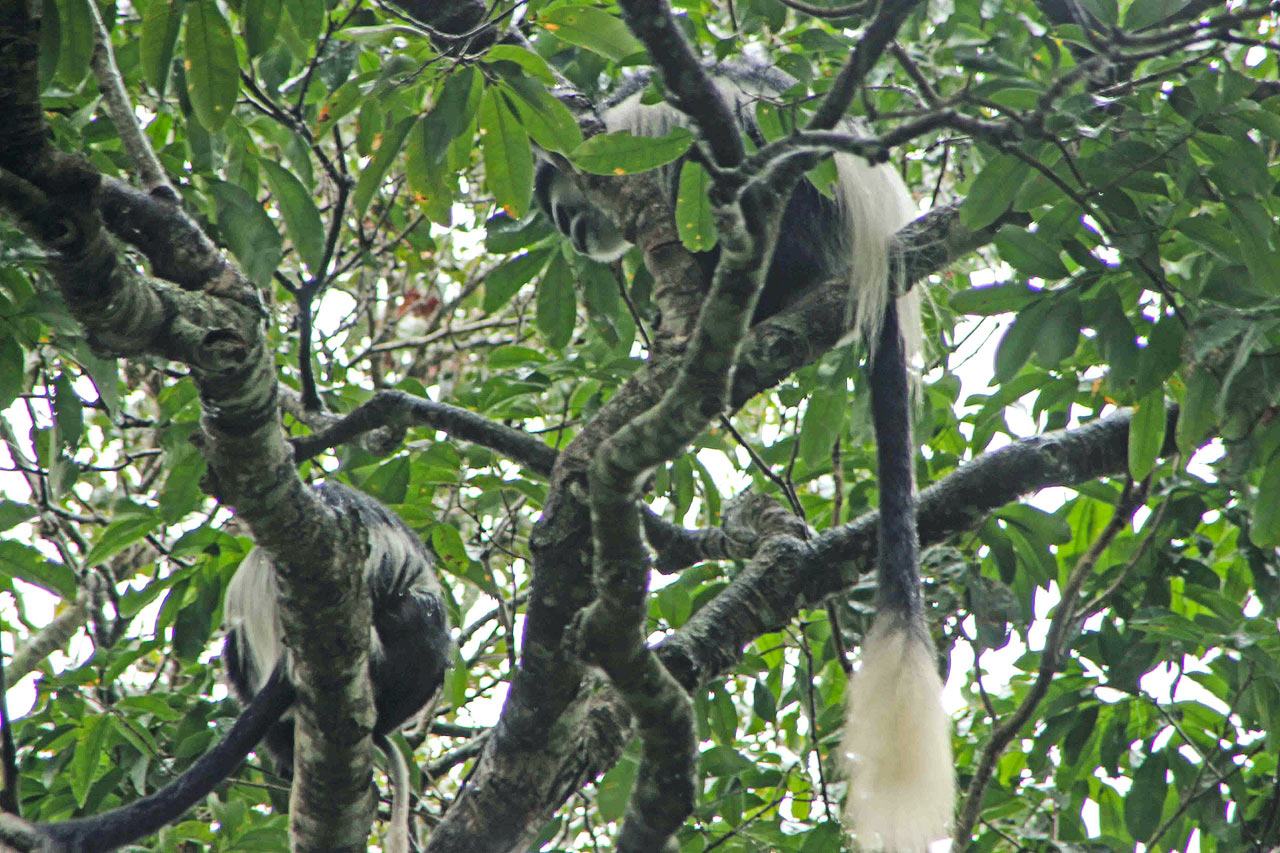 On the way to Ishasha we went on a boat cruise down the Kazinga channel that connects Lake George to Lake Edward. Here we saw some hippos fighting and a herd of elephants coming to drink. 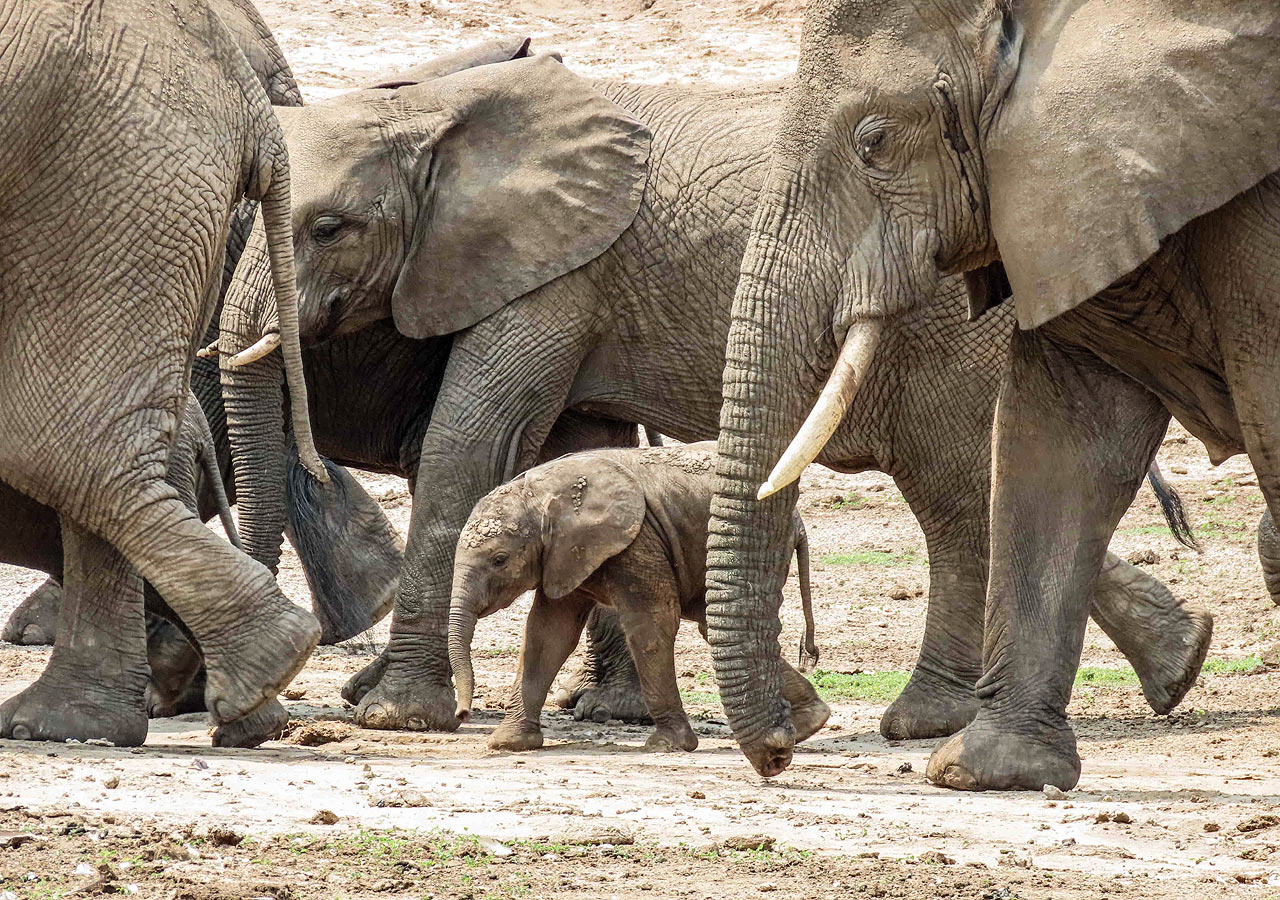 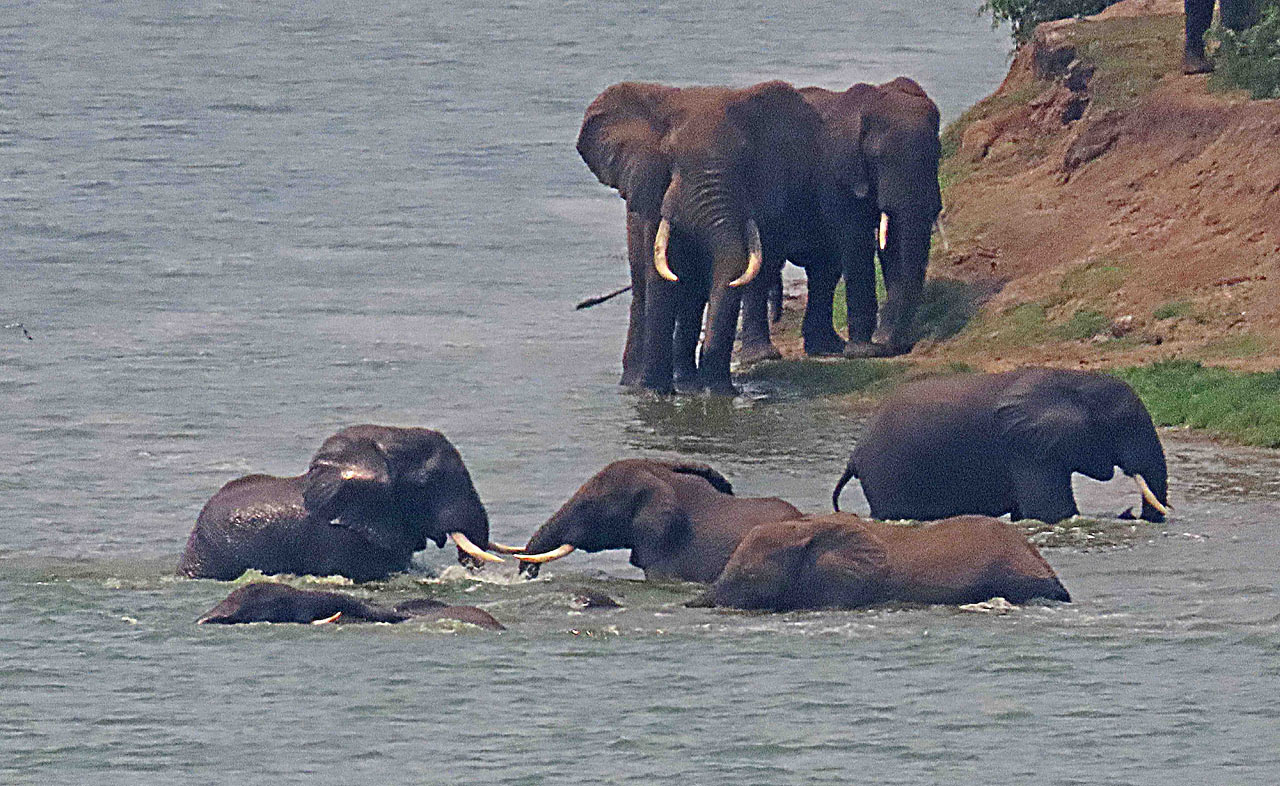 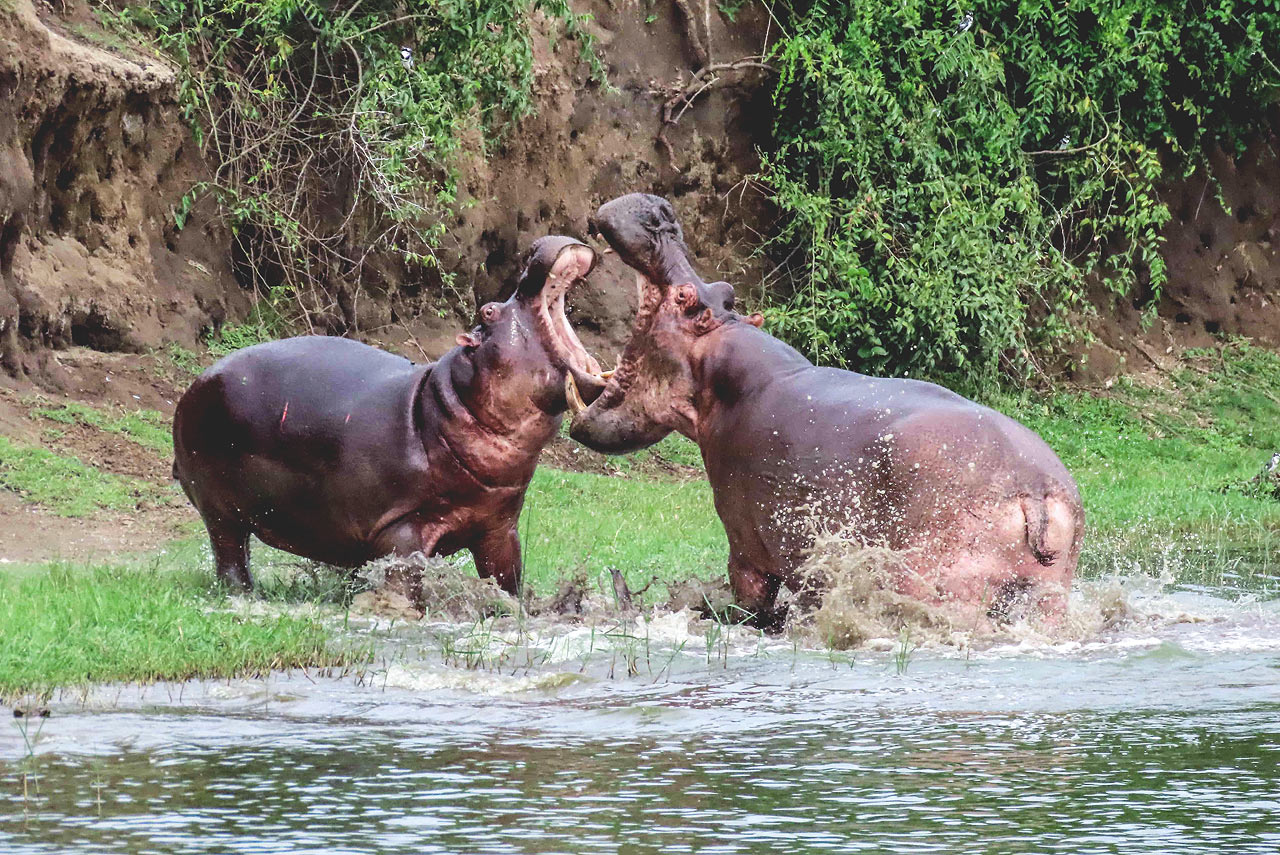 Next we went to Ishasha Wilderness Camp which is a tented camp in the middle of the National Game Park. It is an open camp and last night a buffalo walked through the camp grunting and snorting – glad I was fast asleep! You have to order hot water for your shower and it is delivered in a bucket to your tent!

Ishasha is famous for its tree-climbing lions and last night we saw the lions resting in the large fig trees – a male lion in one tree and 4 lionesses in another tree.

This morning Leona came out on the game drive and we saw the Uganda Kob (deer) and Topi (antelope), fornicating and fighting – it’s the mating season! (Leona is a toy pet lion wearing her own For The Love Of Wildlife (FLOW) jacket, which Dr Anne is taking on her travels to create awareness of the incredible work FLOW does from their Melbourne base – including working with the Australian government to make Australia become the first country in the world to ban the importation of lion trophies and body parts. This ban was enacted in March 2015, a global first followed by France and the Netherlands, with the USA implementing strict import laws.)

We also saw buffalo, elephants, warthogs, lots of birds, baboons and monkeys, including the vervet monkeys. 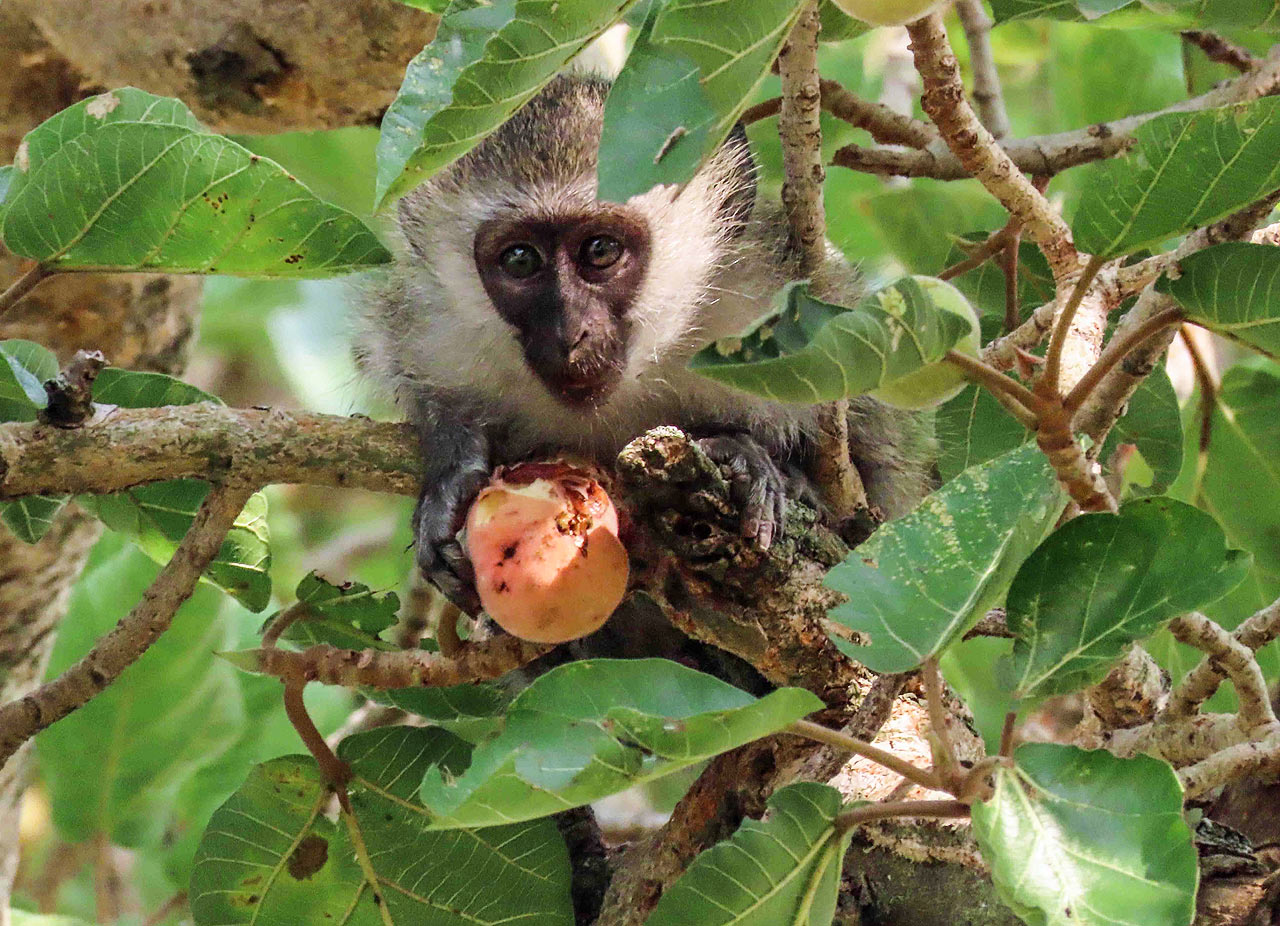 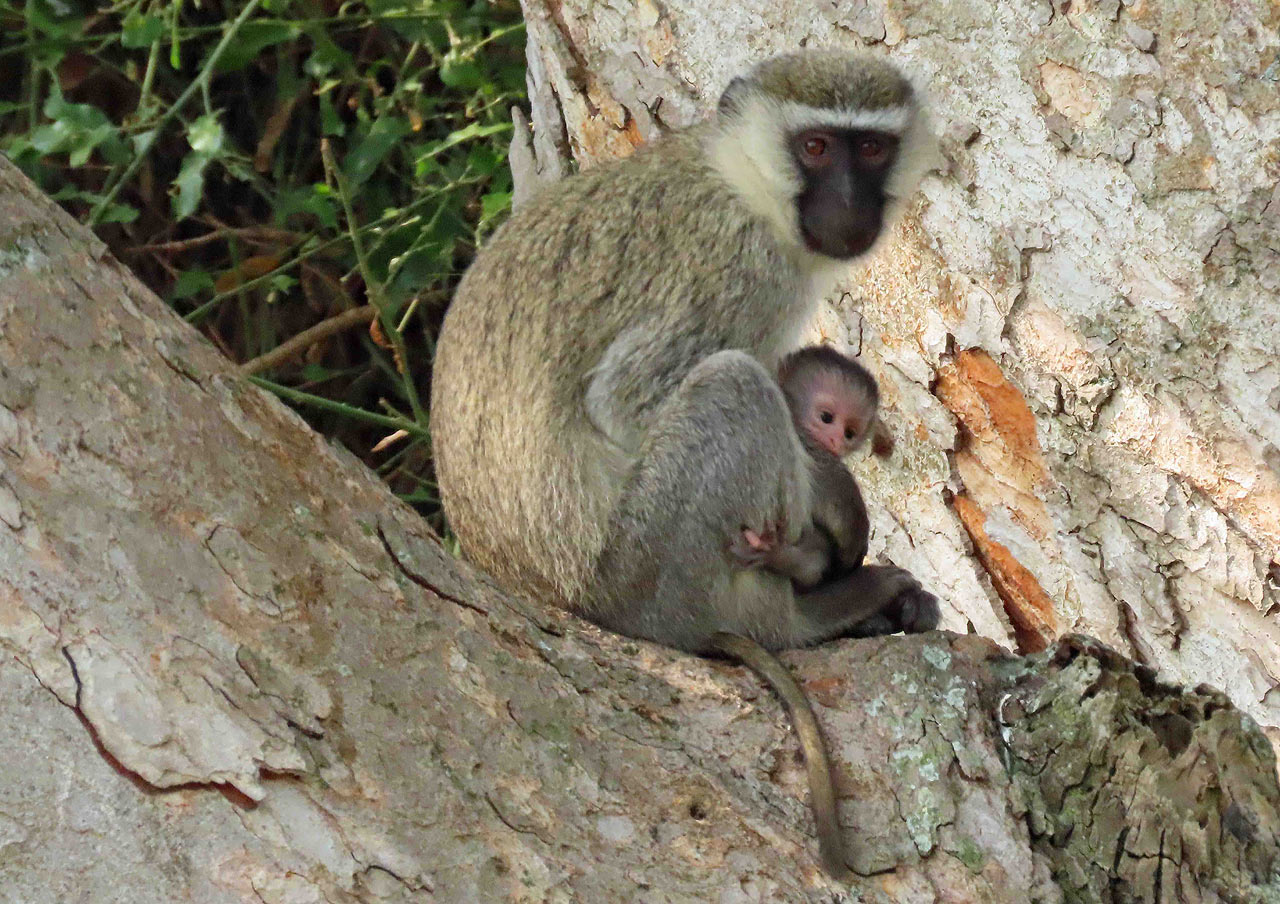 In the evening game drive, Ben spotted a leopard resting in a tree which is usually very difficult to see. To make it an even more amazing experience, the leopard did not move, hence the photo is so fabulous since we were able approach without disturbing it. They are usually very shy animals and run away when approached. 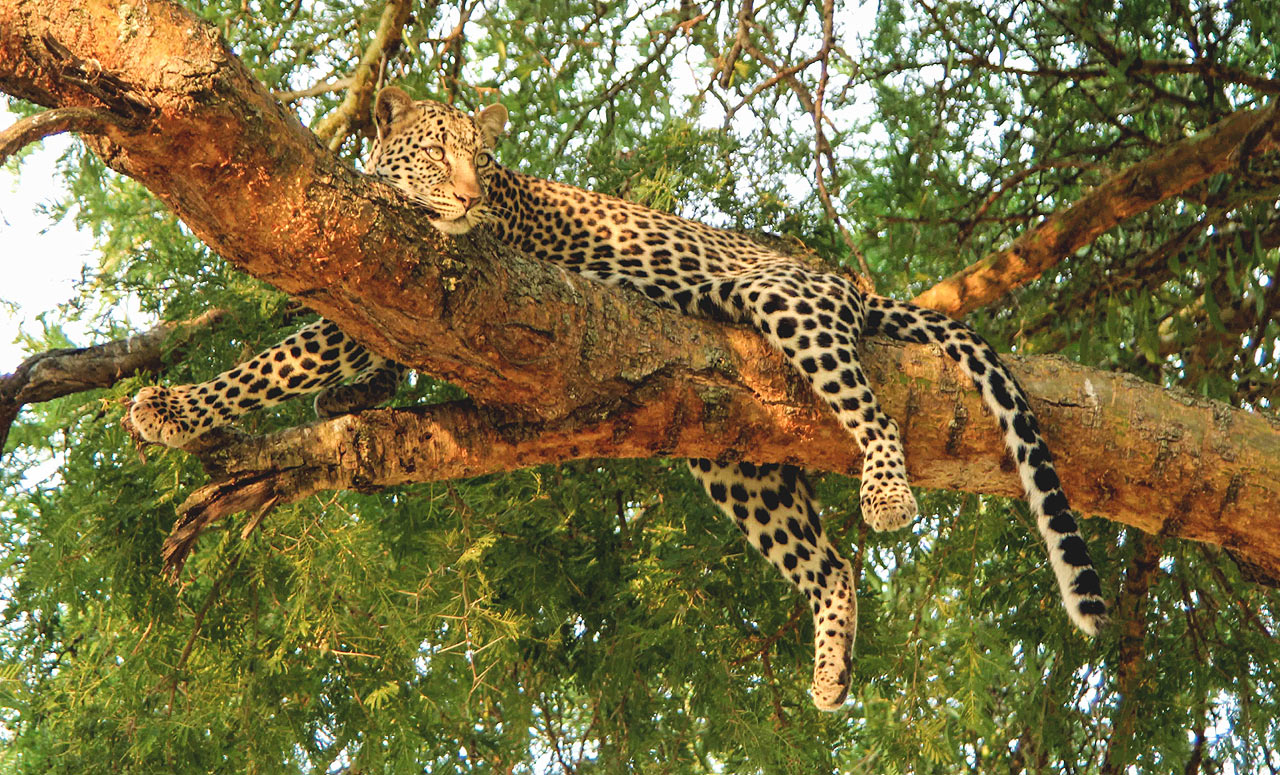 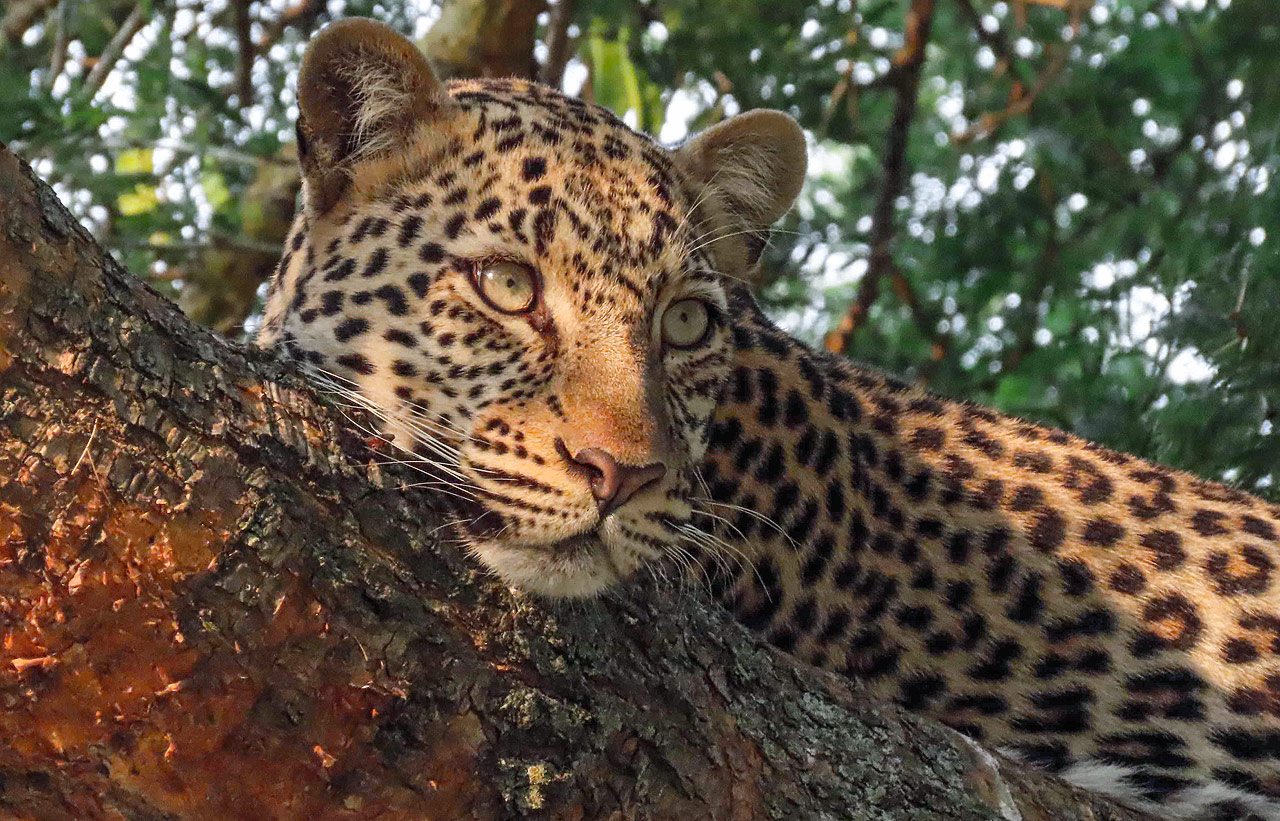 This morning as we left Queen Elizabeth Game Park, Ben took us back to the same lion tree and there was a mother, father and 3 lion cubs there resting up in the tree! The mother came down the tree and sat in the grass 5 metres from our car and it seemed that she was staring straight at us – majestic yet scary!

We have now just arrived at Sanctuary Retreats Lodge in Bwindi and will set off for the gorillas in the mist tomorrow morning!

Dr Anne is encouraging blog readers to learn more about how FLOW is fighting for the future of wildlife around the world and hoping they donate to assist FLOW reach Geneva in August for the Convention on the International Trade in Endangered Species (CITES). CITES is the UN Convention that regulates the international trade in endangered wild flora and fauna.

FLOW is an Australian Blood Lions Official Partner and has a focus on the unregulated domestic trade in elephant ivory and rhino horn in both Australia and New Zealand, which is allowing the opportunity for illegal and recently poached items to be sold throughout markets.

FLOW’s Donalea Patman says: “The undeniable truth behind any organisation, is that money is needed to operate. We are incredibly grateful for all contributions as we do rely heavily on your generosity and support. We work with government and law-makers creating significant change in legislation. It’s our belief that this is where the critical work lies.”

CLICK HERE TO DONATE
All donations over $2 are tax deductible and are possible via PayPal, credit card or direct debit. 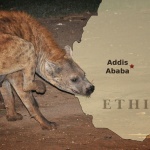 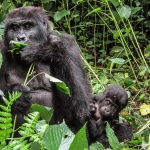 An Experience Of A Lifetime With The Mountain GorillasDr Anne Small